Hobbes the Cat - a rememberance

My 3 person show opens tonight at Gallery 414 (read about that here), but right now I'd like to say a few words about  our cat, Hobbes. We made the difficult decision to put him to sleep, and yesterday was the day.

Hobbes joined the household about 12 years ago, arriving on our back porch one wintry day, looking for a place to stay warm. We put a box out there with a blanket, since we already had one cat, and we were not all in agreement over whether we needed a second one.

If you've ever had a cat, you know how that works. By springtime we were a two cat household.

Hobbes and our other cat, Spike, after some initial conflict, eventually came to terms with each other. I'd not call them friendly, but peace was maintained. Spike was a friendly, affectionate cat. Hobbes on the other hand, was reserved and standoffish, and not one to abide by attempts to love on him. He'd give you about five seconds - ten if he was feeling generous - then you'd better be ready to leave him alone.

He was a ginger tom, with a stubby tail, which led us to conclude he had some manx blood in him, and was, in his mature years, rather bulky. "The upholstered watermelon" was one of his nicknames. 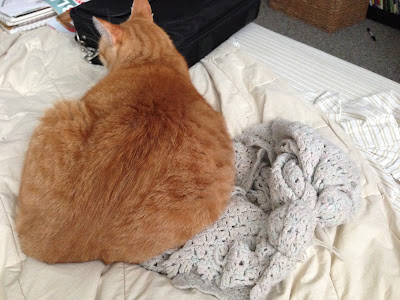 It was John, our oldest son, who christened him "Hobbes" because he was orange, like the character in the comic strip "Calvin and Hobbes."

After years of playing second fiddle, he was promoted to Alpha Cat, after Spike wandered off and never returned


It was at this point that Hobbes came into his own. While still never extremely affectionate, the amount of time he'd allow you to fondle and pet him increased from five seconds to perhaps fifteen or twenty seconds. If there was company, he'd eventually come into the room, remaining in the background, vanishing when the attention turned to him.

He decided his favorite place to be was on my lap, or my belly, if I was in bed. When watching TV, he'd jump up, stretch out, and put his head down. He was pretty much a one-person cat, and I was the person. 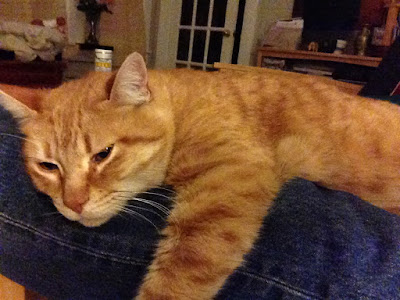 This summer he started slowing down a bit and it became noticeable to the point where we finally took him into the vet. He'd developed several issues, including feline aids, and a tumor the vet said was growing. Unfortunately, he was not a good candidate for surgery. We put him on a regime of other treatments but he eventually stopped eating, and by this month had wasted away to almost half his original bulky self.

It was pretty clear that he was ready to go.

Call me sentimental, call me selfish - I was the  holdout. I knew what I needed to do, as a responsible pet owner, as a friend, but I couldn't quite let go. I took the week off to take care of last minute details around the show, but mostly I used the time to be with him. He would sit on my lap (his favorite place) or my legs, with his head down, sometimes purring a little, sometimes not. The rest of the time he sat on the floor, head down, in a secluded corner of my bedroom. 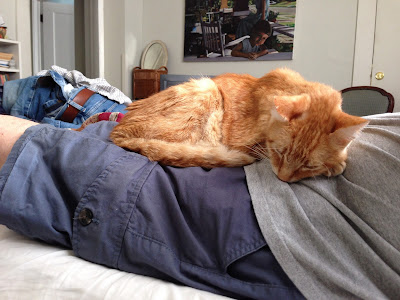 I made an appointment with the vet, Dr Williamson (over at University Animal Hospital), who could not have been kinder. Edward, my youngest, went with me yesterday and we sat with Hobbes when she administered first a powerful sedative, then the final dose. He sat compliantly waiting while we stroked his head and sides, first bobbing his head a bit, then laying it down and becoming motionless.

We took his remains home and buried him in one of the flower beds. I'd dug a hole that morning in preparation. We put a large orange stone that I'd dubbed the "Hobbestone" over his grave and said a few words.

You have to accept this eventuality will come when you take on the responsibility of being a pet owner, but it's still not easy.

He was a good buddy, and will be missed.

Now on Google Plus!

I'm on Google Plus now, where I manifest my geekier side (less about art, more about technology). Follow me at http://gplus.to/RonCrouch